Curators and landscape designers have contributed to the landscape design in the City Botanic Gardens over the years. These are the special features described here: Hill’s Fern Island, MacMahon’s Bush-house, Caulfield & Trapnell’s Rainforest Garden, and Oakman’s Rockery, Cascade and Lagoon.

Curator Walter Hill contrived Fern Island in the low-lying middle of the Gardens, out of an existing ‘lagoon’ created in 1828 by Charles Fraser. It was described on Ham’s Map of 1863. His masterpiece consisted of a long cigar-shaped island surrounded by a moat-like body of water, around which was the famed bamboo grove. Two small wooden bridges spanned the depths to enable visitors to reach the island, and a path encircled the outer edges allowing further access. The planting scheme for this ‘hidden world’ within the bamboos, was jungle-like with an eclectic mixture of native and exotic plants, favouring palms, tree ferns, epiphytic ferns and other tropical foliage and feature species such as Ravenala and Pandanus! 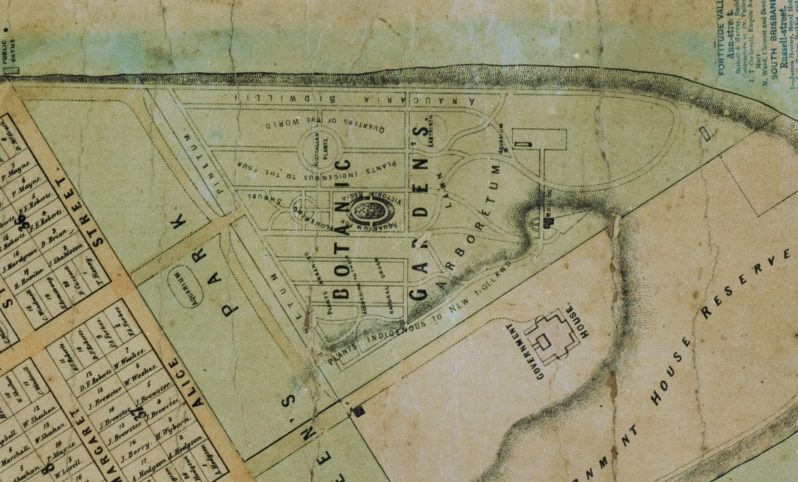 Extract from Ham’s Map of 1863 showing Island but the labeling reads “Aquarium [=Lagoon] for Victoria Regia”. 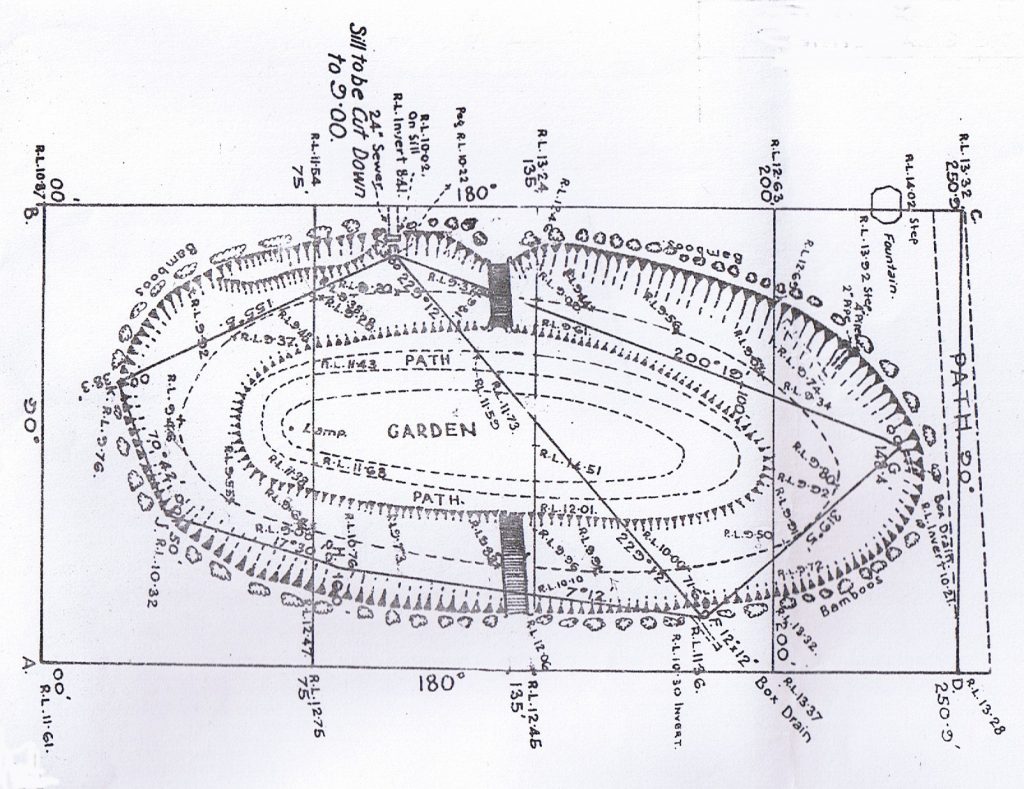 At times the name of the place varied: Hill reported in 1876 ‘many additions have been made to the fern and palm island during the past season’ which indicates the prominence of palms at this stage. Later views were captioned as ‘Bamboo Island’. The rate of growth of this wild garden meant that it was ‘overhauled’ several times – meaning herbaceous material was replanted or replaced – including: Philip MacMahon reported remodelling and replanting Fern Island in 1902, and E.W. Bick added more tree ferns in a general overhaul in 1931. 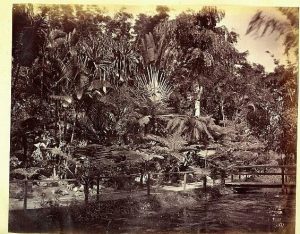 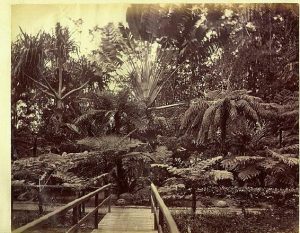 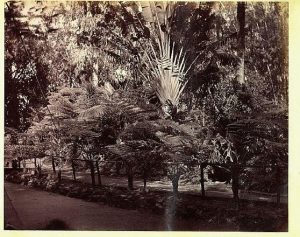 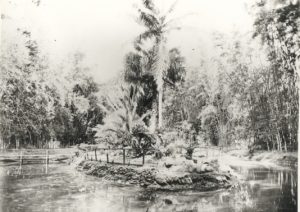 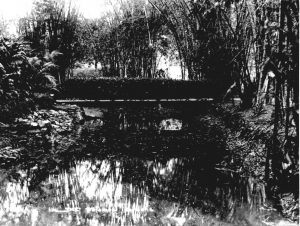 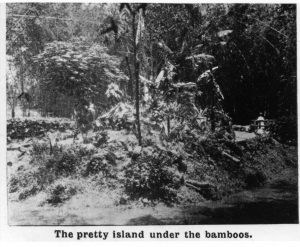 Philip MacMahon created his version of the very popular shade-gardening in 1890. Under the ‘Sketcher’ by-line, was an article on Philip MacMahon and the Brisbane Botanic Gardens:

“But it was in the beautiful “Bush-house” – and beautiful, indeed glorious, this place is – that the leafy volume of the Curator’s volubility was brought to bear upon us at full pressure. There, where vines overarching embower, where orchids, lycopods, and tender mosses on their rocky ledges jostle one and another in charming confusion : where cyclamens cease their troubling and caladiums and begonias are at rest ; where coolness and the goddess of greenery reign in joint supremity ; it was there in his very own precinct – because this “bush house” was created by Mr. MacMahon himself six years ago . . . Happy pleasure-grounds, we thought, to have such a Curator to look after you, and happy Curator also, to have such a pleasurance to love and look after !” [1]

This description provided further evidence of the aesthetic qualities that bush-houses and shade gardening were expected to provide at that time, whether in a private or public situation. 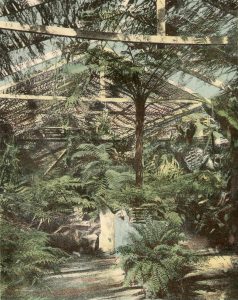 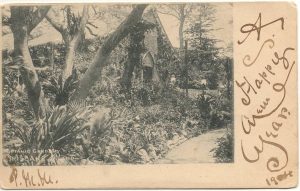 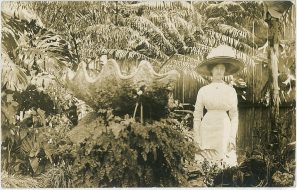 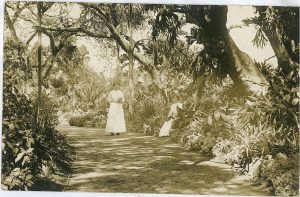 Between the old Glasshouse and Band Pavilion shelter and the hill up to the Residence, large old trees such as the Mahogany and the Queensland Nut (Macadamia) were casting lots of shade by the 1960s. Harold Caulfield and his second in command George Trapnell decided to infill with more palms and use the shady understorey to grow shade loving herbaceous plants of mixed origin (native and exotic). The result is an eclectic compilation that is one version of the Bush Garden School typical of Queensland coastal areas, the Rainforest Garden. 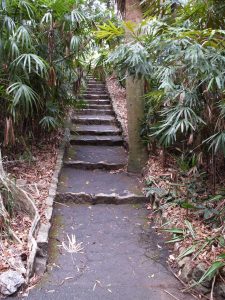 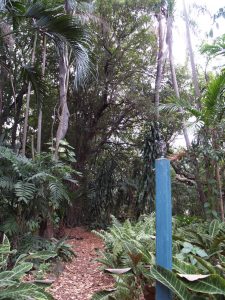 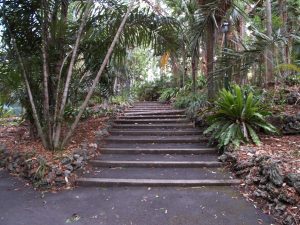 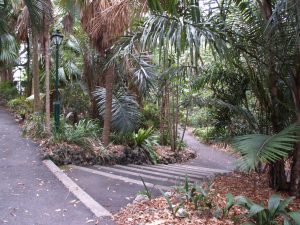 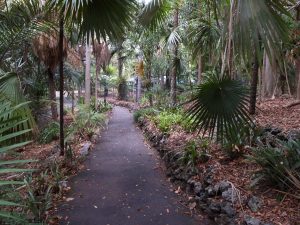 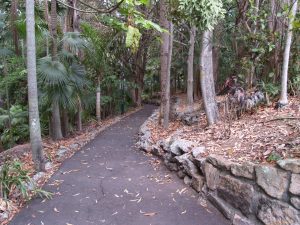 Landscape architect Harry Oakman redesigned the southern end of old Queens Park in the late 1950s and created a new source for the Albert Street Lagoon, complete with rockery waterfall, cascade and another lagoon and cascade that emptied into the older lagoon. He created nooks and crannies and a new refuge island in the old lagoon. 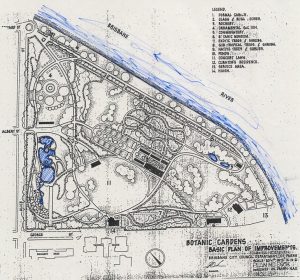 1961 Location Map of all proposed improvements. 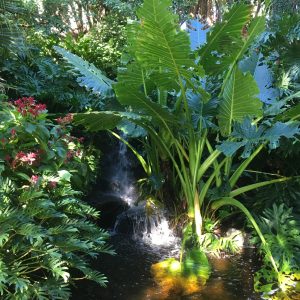 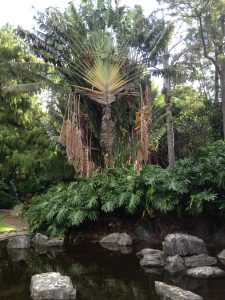 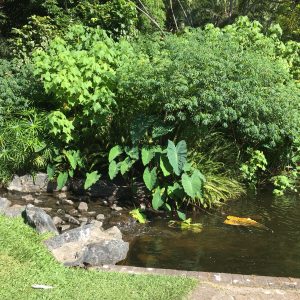 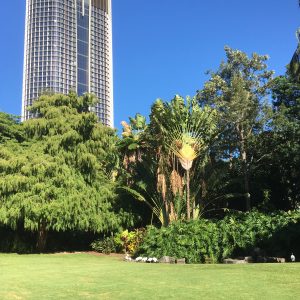 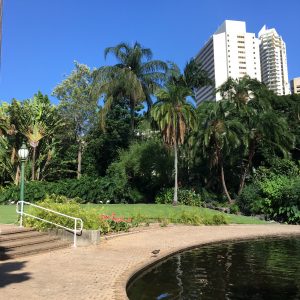 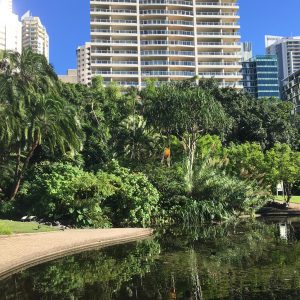 Below is the older Albert Street Entry Lagoon remodelled by Oakman. 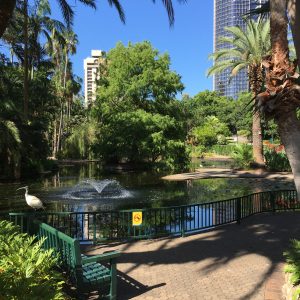 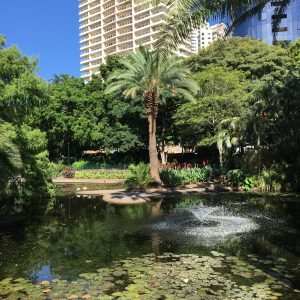 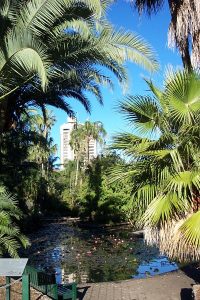 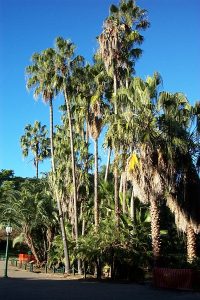